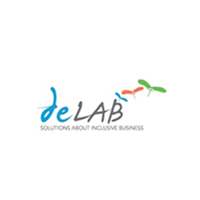 De-LAB is a group of professionals whose different technical skills are required to develop applied research projects, consultancies and initiatives in the field of Inclusive Business and Social Innovation. The team works for universities, firms, private or public institutions. De-LAB’s services are in between the academic investigations and innovative projects to be implemented in a profitable and sustainable way: we aim at representing a synthesis between the innovativeness of the research and its practical implementation.

Since March 2013 De-LAB has developed a training course on Inclusive Business with a specific focus on Africa. The initiative, sponsored by a platform of non-profit and institutional partners, will be part of a Summer School awarding the best African student with the financial support to launch his/her business idea. Additionally, De-LAB collaborated with the High School of Environmental Studies of the Catholic University of Milan developing a training session devoted to Inclusive Business Project Development. Thirdly, De-LAB is exchanging ideas and building its own network together with NGOs, Foundations and private companies in order to raise the awareness about Inclusive Business Initiatives.

Lucia Dal Negro
lucia.dalnegro@delab.it
Lucia Dal Negro earned her BA in International Relations, majoring in International Development and Cooperation from the Catholic University of Milan in 2006. Her dissertation focused on the recovery of the Srebrenica community after the genocide of 1995. She earned a Master’s degree in 2009, with a dissertation investigating the Nestlè-Nespresso sustainable coffee farming project in Costa Rica. From 2009 to 2010 she attended an additional specialist year at the High School for Environmental Studies of the Catholic University, during which she spent three months at the UNEP/Wuppertal Institute Collaborating Centre on Sustainable Production and Consumption. At the end of 2010, she won a scholarship to pursue a three-year PhD in Political Science at the School of the Catholic University of Milan. In 2011, Dal Negro moved to London, where she earned an MSc in Environment and Development at the London School of Economics. After that, she spent three months as a visiting student at ENDEVA (Berlin), the German BoP Lab. Once back in Italy, she decided to launch the Italian focal point for BoP/Inclusive Business issues, and in 2013 she founded De-LAB, together with two colleagues living in Italy and three others living in Vietnam, India, and Germany. At De-LAB, Del Negro follows the Inclusive Business projects, whereas her colleagues work in the Social Innovation area. During her studies, she has collaborated with the Holy See Delegation at the UN Offices in Geneva for the Human Rights Council kick-off session (2006), Actionaid (Governance Unit, 2007), CTM (Project Development Unit, 2010), UNEP/Wuppertal Institute CSCP (2009), the Municipality of Verona (2010), and the National research Council (2011). Additionally, she volunteered as teacher of Italian language for migrants, and she is currently engaged in volunteering activities promoting the social inclusion of drug-addicted women.